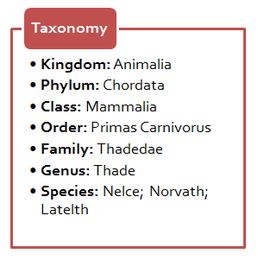 The Thade peoples are comprised of three different species with each species grouped as a caste. The caste system is not a social system; it is the establishment of each species as equals for the betterment of the Thade people. It is important to note that although the three species have a common genus (Thade), the species themselves can not interbreed. Each species retains the distinctive traits that evolved over time to allow that species to fill a niche.

The earliest traceable ancestor is Thadedae T. Protus. It was a small mammal roughly the size of a housecat found on Earth. In comparative size to its environment, it was no bigger than a small shrew.  All members of the Thadedae family are predatory carnivores although they do scavenge and are capable of eating decomposing carcasses without any ill effect to them.

Scientists are at a loss for Order classification. Thade are classified under the Primates order however, depending upon the researcher, they are also classified as Carnivora. It's the opposable thumbs and large brain case that confuse scientists. Thade do not take kindly to being called "giant weasels", although their temperament and bluster match that particular species. It was decided at the Symposium of Taxonomic Nomenclature (Berlin, 1952) that Thade should be deemed Primas Carnivorus. It wasn't as if the think tank had much of a choice when faced with loss of life and limb.

The Three Species and Castes 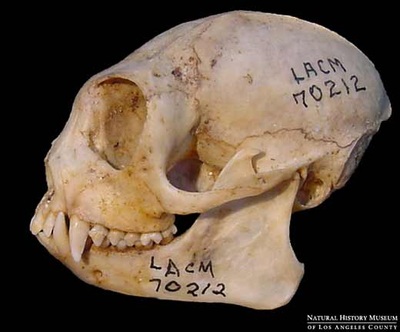 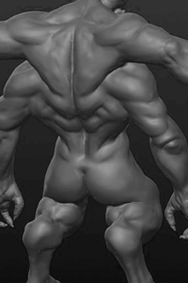 Primary and secondary shoulder musculature and spine. (T. Nelce pictured). The spine is arched and hips rocked forward in order for this mature bull to achieve a completely upright stance.
All Thade are muscular due to home world origin gravity. They share many similar physical features with humans. Differences would include the cranium, two sets of forelimbs, and feet.

The three species are nocturnal mammals. Skin coloration varies from cinereous to darkish grey regardless of species.

T. Latelth are distinguishable by blue-grey dappling along their spines. T. Norvath have larger and darker spots which extend over the shoulders as well as wrap around the thigh and groin areas. T. Nelce haven't any markings. All three species physiology resembles a humans but Thade dentition contains longer canines which replace the premolars found in humans in addition to standard canine teeth, and a secondary forelimb set gives muscular males a hunched appearance.

Thade stance varies by gender and age. Both male and female have a bent-knee stance that becomes more pronounced in males as they age and gain mass. The thick (fold of flank) extending from external abdominal obliques and thigh becomes more pronounced as well. Large male's gait and other movements are deliberately slow however they are capable of rapid motion.  Females and young males are capable of maintaining upright posture; older males tend to squat when stationary, with upper shoulders rolled slightly forward and secondary limbs resting on the ground, closed fist with middle phalanx supporting the weight of the upper body.

Eye color varies from deep blue to black. Thade visual acuity is extremely poor if there is any light interference. They see shadows and blurs in daylight. Nocturnally, their vision is more keen; electromagnetic radiation plays an integral role as does a larger optical aperture (the pupils expand to the physical limit of the eyelids).  Thade are also capable of detecting body heat. It's theorized that these abilities evolved over a period of time due to the intensity of night on their planet of origin. Lacking a moon to provide illumination at night, the planet's lifeforms had only the stars as a light source.

Their auditory ability surpasses human due in part to ear shape. Thade have a hairless, medium sized, "hooded ears". The auricle curves in on both sides giving a crude impression of a cowl or hood. Thade are able to furl the auricle tightly closed or expand it fully; the ear itself can prick or droop or flatten against the skull and usually serves as an indicator of emotional status.

Echolocation is tantamount to their survival. Each species utilizes a unique sound set. Clicks and 'drops' are produced via the throat, tongue and sinuses. The high pitch keen (or whistle) exceeds the range of human hearing; it's similar to an Earth bat with the cap at 210kHz (the bat tops at 250kHz). These high frequencies help a thade to pick out fine detail when is uses its echolocation to investigate an object. The final sound is is the deep booms and 'gravel' (metethsus) are produced via the lower throat and chest.

The lowest spoken or sung note a Thade bull can produce is G-7 (0.189Hz) which is eight octaves below the lowest G on a piano. Human ears are incapable of hearing this low a frequency.  The highest sung note recorded was C7. It should be noted that the high pitched keens are akin to whistles and thus not vocal. Humans are incapable of hearing metethsus but it can be felt as a resonance in the chest. Metethsus normally serves as a warning before a bull strikes and has been described by humans as a sudden sense of malaise or foreboding, or "gut feeling that something is terribly wrong"; some humans have reported metethsus as bringing on nausea or migraines.

All three species have a keen sense of smell. The deep radix and short dorsum of the nose itself aids in trapping scent; the columella is tipped upwards to fully expose the nostrils. It should be noted that the nostrils (similar to mouth, ears and eyes) can be clamped securely shut.

Thade facial expressions and muscle movement are more pronounced than in other races. There are more muscle groups and varied attachment points, depending upon species.

The Thade face is an oddity. Velvet soft, it's reminiscent of a bald pug's backside. Think of a baboon running full-tilt into a brick wall: the snout is slapped flat to resemble a human's. All that excess skin would hang down on each side of the mouth and, if you were to press your fingertips against it, you would discover it to be as malleable as putty. Don't be fooled. They can draw all that tissue back at a moment's notice to expose every last tooth in their heads. Further, the skin along the cheeks can be drawn upward to protect the eyes when biting. Typically, you'll find them staring at you with slack jaws and closed lips, and their large eyes cloaked by eyelids and the skin of their cheeks drawn up in such a fashion as to make the eyes themselves appear ludicrously small. The excess skin folds curtaining each side of the mouth are smoothed out. It gives them a dour and sour and downright grumpy expression. Don't be fooled! I'd rather one of the brutes stare at me unperturbed than with eyes wide open and teeth bared. - Garfield, Francis (2006). "Guide to Xeno Identification". International Journal of Xenobiology 35 (5): 1123–1127.

In primitive times, the bull's larger dentition and size was not used for hunting. Rather, they were utilized to defend against a predator or else, more commonly, to deter another bull. Canines developed for slashing instead of biting. Practically all injuries in male-male fights were slashes from the canines and were heavily concentrated on the anterior part of the body, specially on the head, but also on the neck, arms, chest and shoulders. In the most common fighting behavior (sparring), bulls grappled with their arms and aimed at the head of the opponent. Thus, both contenders were usually hurt as both exposed themselves to the same attack/retaliation. Much less common fighting behaviors were mutual and non-mutual biting and mauling (not slashing) and wrestling. Bulls also delivered blows and slaps and used their arms or their skulls to fend off these blows.

It is seldom that a modern bull will find himself in such a primitive display but instinctive reactions haven't been watered down by evolution or time. Fights between modern Thade bulls are rarely lethal and usually conclude after one or two slaps.

There is pronounced sexual dimorphism, usually in size and canine development, but also in spot coloration. A male Thade is a bull. A female Thade is a marly. Both genders will tolerate the Earth terminology "man" or "woman". All three Thade species are physiologically similar to humans with regard to reproductive systems however the bull only feels the urge to rut when exposed to female pheromones.

Thade sexuality and intercourse is a private and ritualistic endeavor. Each species has unique protocols although there is similarity in that each species' bull will engage in a courting display to indicate his interest in union with a female; such unions serve to secure the bull's status in society as well as to pass on his genes to a new generation. Thade population increase occurs at a snail's pace compared to other sentient species.

Homosexuality does not naturally occur in Thade due to sex drives which are geared towards pheromones rather than physical attraction. When interacting on a social level with other species, homosexual xenos are treated no differently than heterosexual or asexual xenos. Discrimination based upon orientation, gender or species is unheard of amongst Thade.

Thade are carnivorous although their diets can include hard nuts, fruit, insects or fish. They do scavenge and have been known to eat rotting meat without any adverse effect. They are unable to digest starchy foods (tubers/grains) well.

It's important to note that Thade do no eat in public. They will refrain from consuming food in a social setting although some will sit down with a group in order to partake in necessary events with other species. This "meal taboo" stems from natural instinct as well as religious mandates.

The Thade language is enhanced by clicks, chuffing and snorts which indicate emotion. Growling signals both pleasure or threat. Aggressive growling between bulls is often misunderstood by other species as "purring". Primary communication is the spoken word accompanied by body language. Cybernetics have rendered some physical aspects moot however expression is a learned method; widened eyes and an optic flaring to red both indicate challenge. Other physical expressions haven't changed since the introduction of augmentations. A Thade bull standing absolutely still while making eye contact is always a prelude to a violent attack. Pitching the head back and yawning wide enough to expose canines and throat a silent warning which, due to respirators, is now simply indicated by the backward motion of the head itself (which should  not be confused with a nod of affirmation or greeting; the greeting lacks the intake of air into the lungs). The female version of this is bared teeth and a low hiss with head angled downwards.

The Thade ability to "purr" results from the intrinsic (internal) laryngeal muscles responsible for the opening and closing of the glottis (space between the vocal chords), which results in a separation of the vocal chords, and thus the purr sound. The movement of the laryngeal muscles is signaled from a unique “neural oscillator” in the brain. "Purring" can be distinguished from "growling" in that the threat growl is only produced upon exhale while the purr occurs throughout the respiration cycle. Volume and frequency also designate growl from purr; the growl volume can be soft or loud but always begins in an upper register before dropping below the range of human hearing. The emotion-based growl ("purr") remains the same in pitch. Males "purr" more frequently than females. It's believed that the noise was used to broadcast the primitive bull's passive or non-aggressive state to the surrounding band.