All Thade are divided into three main castes: Operarius (Worker), Bellicus (Warrior) and Monachus (Priest)."Each caste is comprised of a different species although we all share the Thade genus. Operarius, comprised of Nelce species, build and tend; Bellicus, the Norvath species, fight and defend; Monachus, species Latelth, dream and transcend. Unless it's the Bellicus speaking. They'll tell you that we, the Monachus, also offend." Brother Theodosius Renat, Schema-Archimandrite of Thessesius, explaining the species and caste breakdown to a Swithwardian representative.

Operarius
Operarius are the builders and tenders - artisans who design, fabricate and assemble. They are responsible for agriculture, public works, construction, maintenance, transportation and many of the other elements upon which a society depends. They are held in high regard for the services they provide and their counsel carries more weight than the other castes. The proper honorary for a member of this case is Opifex.

Ranks and titles vary by purpose. Some examples are:"Cerillium wasn't built in a day but that framework was laid by our hands. Cherish it, hone it, strengthen it." Opifex Leon Tardes, Chief Artifex of Canus

Monachus
The Monachus are the seekers and philosophers. Intelligence is prized above all else. There is absolute equality between genders. Members of this caste spend a considerable amount of time engaged in the pursuit of knowledge. They are typically addressed as "Brother" or "Sister".

Novice: Those born into this caste are automatically granted the title of Novice. One can spend their entire lives with this title if they have no ambition to further their status within the cast.
Rassophore: the first degree of the Monachus. A Novice will be considered for this position after his or her first fifty years of service to the caste. Rassophore usually adhere to one Discipline which they choose prior to seeking the degree. Some Disciplines include philosophy, medicine, diplomacy, education, or specialized sciences.

Bellicus
The Bellator (female Bellatrix) are members of the warrior caste. All military and law enforcement are comprised of these members. They are highly skilled in martial arts and combat. Masterful tacticians, they're able to quickly analyze a situation to turn it to their advantage.

Bellicus cybernetics are geared towards combat. Younger Bellators tend to rely upon physical skill but more "bulk" by time they reach 100 years of age. Internal organs are frequently replaced with more efficient systems.


It's said that there are over two hundred ranks and titles within this caste although that has never been verified. It is very clandestine by nature and seeped in traditions and rites. When contact was first made with Earth, this caste adapted its titles in order to gain a sense of commonality hence much of it now seems Roman in structure. The ranks and titles are only used for public display however; the actual titles are locked away in secrecy.

Each caste has its purpose and each species focuses on that task. Cerithades Peth has all the same requirements as any city on earth and the castes work together to provide law and order, public works, transportation, health care and education.Children are educated within their caste beginning at the age of five. They attend internal schools until they reach the age of twelve. The Monachus takes over their education at the age of thirteen and they're provided with a wider range of subjects. They apprentice within their caste beginning at the age of twenty and usually fulfill a role by time they reach twenty-five.

Unions (marriage) do not occur until a Thade is well into their thirties. Many choose to refrain from seeking a mate until they reach fifty in order to better establish themselves. Not all unions result in a holden. Many choose to remain monogamous. Holdens are usually founded with a single patron once he's reached a sufficient rank within his caste. A typical holden male is over the age of two-hundred and has proven himself well enough to attract the attention of an equally proven female.

Cybernetics are a rite of passage that begins at the age of twelve with the implanting of a processor. The ceremony is called Transcendence. Augmentation is a fundamental right within society. Augmentations are usually done in stages once a child turns eighteen. The typical Thade has an optical replacement for his or her right eye, an augmented left arm and various additional appendages or devices to aid them in work. Females usually opt to keep replacements to a minimum in order to retain their agility. Males, however, lean towards a process known as "bulking". It isn't uncommon to find a male with mechanical augmentations replacing entire limbs, especially legs and internal organs. Bellicus are the most extreme of the castes and machine tends to outweigh biologic by time they reach five hundred.

National mottoes are a foreign concept to the Thade. Nemo liber est qui corpori servit was a proverb attributed to Lucius Annaeus Seneca, a Roman statesman and philosopher, around the time the species first made contact. The statement was perhaps in reference to those who indulged in the unbridled pursuit of pleasure (and other excesses) but the literal translation ("No man is free who is a slave to the flesh [body]") appealed to a culture that intertwined itself with machinery.

A century later, during application for an embassy exchange program, the question of a national motto arose. The clerk reputedly scratched his chin and then wrote the proverb on the blank line. It has been the national motto ever since.

Flags to mark territory or designate a caste are not part of the thade culture. Thade are nocturnal. A flag is pointless if waved in the dark. 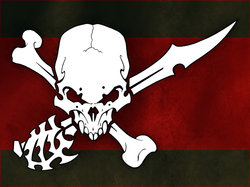 Flags did not gain importance until first contact was established with alien lifeforms.

The second flag, now only historical in meaning, symbolized the three castes: A white skull (knowledge) superimposed over a crossed bone (structure) and sword (might). The foreground color is red (and texturized, something important to a tactile species) with black bars above and below to symbolize the heavens and underground.

It was later pointed out to the thade that this was the same image as historical "pirate flags" found on Earth and thus the image displayed on their ships broadcast them as space pirates. Though not opposed to this as a whole, the religious cast put their claws down and the flag was scrapped for something more "dignified". 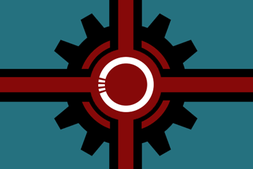